Unemployment sat at 8.2 per cent in July this year, including a doubling of the number of unemployed in Bendigo in the last 12 months.

THE rise of microbusinesses in some of Bendigo’s most disadvantaged areas is helping the city fight back against a looming “jobs crisis”.

The number of businesses which employ four people or less increased in Bendigo by 2.3 per cent from 2014 to 2016, while small businesses – employing between five and 20 people – decreased by 5.9 per cent.

The figures were included in a KPMG report commissioned by the NBN, and completed by demographer Bernard Salt.

The report painted a grim picture of the jobs market in Bendigo.

Unemployment sat at 8.2 per cent in July this year, including a doubling of the number of unemployed in Bendigo in the last 12 months.

“Labour is being jettisoned; workers are struggling to find employment in other sectors.”

While total jobs were down over three years, the number of microbusinesses continued to rise – particularly in traditionally disadvantaged areas.

There was a 17.6 per cent increase in microbusinesses in the California Gully-Eaglehawk area, along with significant increases in Heathcote, areas north of Bendigo and areas to the immediate south.

Strathfieldsaye was driving the increase in small business numbers in Benidgo, recording an increase of 31.6 per cent from 2014 to 2016.

Mr Salt said it was a reflection of the changing demographics in central Victoria, where younger people were increasingly starting their own businesses rather than finding work in small-to-medium businesses. 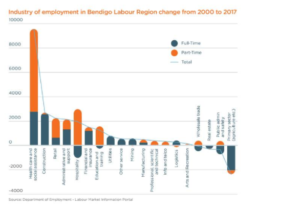 He said it was a trend that could help the city fight back against future job losses.

“What is the best new business created in Bendigo over the last 12 months by a person under the age of 30?” Mr Salt asked.

The rise of part-time work in the health care and social assistance sectors had driven job growth since 2000, while full-time job losses in agriculture were contributing to rising unemployment in the region.

This article is courtesy of the Bendigo Advertiser  www.bendigoadvertiser.com.au